S/tr:w/EET WALK: A travelogue thru an American unconscious and some Cities of its Civil War

“…I kept feeling, deep within, that I was watching a dream that had somehow been taken out of the unconscious and filmed. Those wonderful traveling shoes of a street walker leading me on to places I’ve been to within. The foreign land of magic. The caves that call us all so we can find the core of our being. The market places of slavery which are still in existence today. …the modern Hecate beckoning us on to freedom with those seven rays of light and uplifted torch… rightfully reminding us of important boundaries and the respect due by wearing the slogan, “Don’t Tread On Me” filmed where the horses, incredibly powerful symbols in their own right, are harnessed to carriages helped to solidify within just how dangerous civilization is.
It takes all that raw animal power and forces it to wear so many binding pieces of leather and pull a conveyance around, mostly for amusement. How civilization takes us away from the witches’ hill, from the darkness of caves and enslaves us to seemingly safety-providing collections of high-rise fortresses where not only our life is relegated to something less but our very birthright of being erotic is repressed so that the only thing that can grow is a pornographic plant – a poor substitute at best, a weed at worst.”
— T C Aldrich
What innate qualities do shoes convey-especially if found on a prostitute’s walk?An artist who found the shoes used in S/tr:w/EET WALK in Dublin Ireland, incorporated their  surrounding environment into her video. She then invited a dialogue with her  work.
My film connects directly to actual events.
Ireland, where many Southerners came from, is the root for many Americans.
After  getting the shoes by chance, I was scheduled to go South, whose past still carries relevance today: slavery, the Civil War, the fight for Civil Rights,  and now our first President of color.

Moving between diverse landscapes, seemingly haphazard facts disclose  historic and mythic connections and connect tangentially. My story of being trailed by a prostitute  when visiting Ireland, attributes belonging to the goddess Hecate, and traces of  artists of Irish descendent (Flannery O’Connor / Augustus St. Gaudens) were found  by chance during this journey with the shoes.

In Irish  myth and its Cinderella fairy tale there is a world where women have the power and God is a woman.
Public monuments regarding slavery and General Sherman impart the patriarchy  asserting power. Although the South’s slave trade was abolished; today’s global sex trade  may be interrogated as modern slavery via feminist texts.
The form of America’s symbol of freedom, the  Statue of Liberty, has an ancient twin,  Hecate; the witch, crone Goddess, who led led another Goddess who is ascribed with re-birth, out of the  Underworld…

Lady Liberty leads our nation to…? 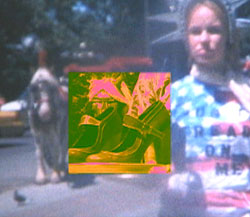