We are departing: after the events of 9/11, many feel we are on a pinnacle of change.
The show explores intuitive musings regarding the meanings of “departure”, and the shapes of 4 Chinese ideograms for “to depart.”
Looking at their characters basic structure, I saw an image of a gate with a serpent inside it. Both “passing through a gate” and “serpents” are Western symbols of change, corresponding thematically to the definitions of the word “departure.”

DEPARTURE (definition):
– a departing; going away; leaving
– a starting out, as on a trip or new course of action: as, political action is a new departure for labor.
– a deviation or turning aside (from something.)
– [archaic] death.
– in nautical usage: the distance of a ship due east or west from the meridian of its starting point (a ship’s position in latitude and longitude at the start of a voyage from which the dead reckoning is begun.)

The REVERSIBLE PAINTINGS design relationships between a photographic element of human feet walking; and the Chinese ideograms for “to depart”. Over time, the Chinese character for “to depart” evolved into 4 changes, before becoming obsolete and removed from the dictionaries during the Cultural Revolution. Traditional Chinese calligraphy has its own critical criteria concerning line and composition: foremost is the relationship between the horizontal and vertical strokes that make up the form of each character.
To write beautiful calligraphy, one must arrive at a sense of balance and harmony before execution.

This balance as similar to the struggle Homo sapiens attempt to maintain as they walk upright. Their stance enables them to depart from the realm of the strictly animal, while ushering in a human consciousness. This is a constantly changing, precarious state of equilibrium, engaged in while heading toward their created civilizations.

Different variations are found on either side of the each painting: the visual elements are partially obscured and change with the shifting, available light. Perhaps these works will bring to mind the turning of a page, a parallel universe, dream space, or a world whose inside-outside belongs to a singular unit like the body-mind connection felt while walking on the earth.

The shadows cast from the etched glass on the SHADOW BOX lids change and interact with the glyphs beneath them, written inside the box.

The DEPARTURE INSTALLATION assemblage refers to a trip — perhaps of immigration to a new land and time. Out of the trunk, imagery reflects onto a mirror set on a ladder:
A figure passes through gates, with songs and sound about passages, originated from all cultures.
Two spaces are presented: one abstract — the protagonist’s interior world and one representational: witnessing the protagonist’s movement (swimming in the sea, crawling, and walking) that reference the meanings for “departure”. 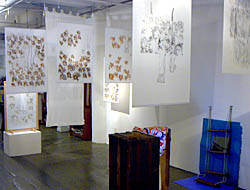 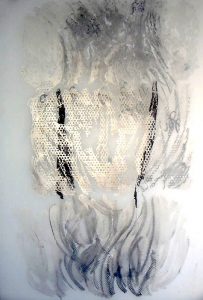 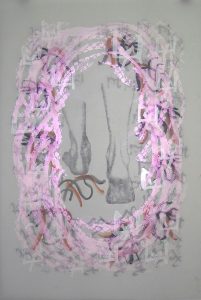 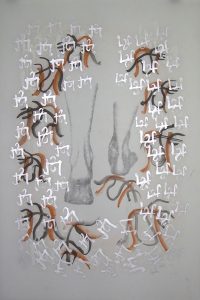 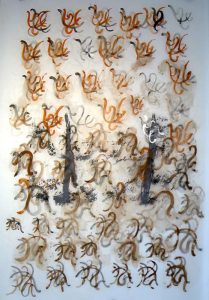 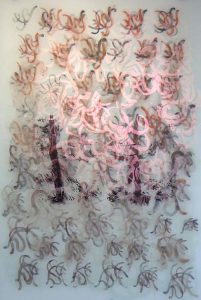 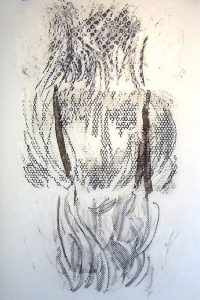