NY (see) – [a pun substituting the word “see” for the letter “C”] captures today’s zeitgeist and is White’s first feature-length movie. Eschewing the documentary films’ standard of expressing opinion, and made without a script, storyboard or an editing plan, NY (see) reflects what New York stands for: America’s cradle of immigration; the site of the 9/11 Disaster; the platform of a genuine international city.

At one time New York was considered to be the center of the art world. What does it mean to be an artist-immigrant in New York after 9/11 when the whole world is on the verge of major change?

NY (see) centers around conversation that occurred during studio visits where topics of personal identity, artistic practice and issues of today’s global market were expressed. NY (see) presents its characters and moments captured in time. The colliding audio and visual allows the viewer to intuitively draw the segments of the movie together for themselves.

Architectural marvels such as the Guggenheim Museum, the Crystler and Empire State Buildings contrast with bridge and street scenes. Places seen include: The IMAGINE Peace Memorial in Central Park’s Strawberry Fields; The Statue of Liberty; Ellis Island; Times Square, the World Trade Center site; and Union Square decked with public shrines created in memory of that disaster. Public events include a runners’ race in Central Park; a Protest Parade against Nuclear Weapons; St. Patrick’s Cathedral and Rockefeller Center during the time of the Pope’s Funeral; William Kentridge’s film presentation in Central Park’ and THE GATES PROJECT by Christo and Jean-Claude; Robert Smithson’s FLOATING ISLAND and Lili White’s sidewalk projection of her video CLOUDGATE.

Throughout the piece Ms. White keys out her painted body using Chinese characters for “eye” and “to see” and uses the mass-produced Caranguejo (a toy-like version of Brazilian CONCRETE artist, Lygia Clark’s ANIMAL-CRAB sculpture) to convey a sense of internalized experience. The movie refers to poetry, the written language and the act of writing calligraphy itself; which like the manipulation of Clark’s ANIME-CRAB, evinces the connection between mind and body. 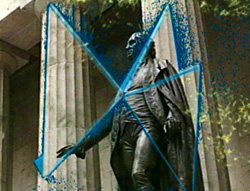 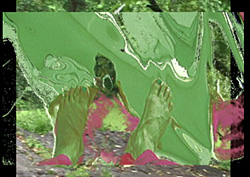