Traveling with Neptune: Portrait of my Father

DVD Video; Copyright © 2001 Lili White
Length: 15:00 minutes
Included in The Past is Still Here at the Newhouse Center for Contemporary Art at Snug Harbor Cultural Center.

Traveling With Neptune: Portrait of my Father is an assembled installation that includes found objects (some from Snug Harbor’s holdings), a group of collaged shooting targets, and two videos – one a wall projection and the other a documentary of my Dad and his stories.

My own father, now a member of the steadily disappearing veterans of WWII, was an enlisted sailor and a Chief Radio Operator in the US Navy, who saw action in the Pacific theatre. I videoed him as he related his Navy experiences from the early 1940s and re-painted this imagery using computer techniques. I found the book, Bluejacket Odyssey: Guadalcanal to Bikini – Naval Armed Guard in the Pacific, by William L. McGee, invaluable in my research. This book is written as eyewitness testimony of WWII navymen. Both McGee and my father shared the USS Fall River as home. Two of my father’s stories that I was drawn toward were his witnessing the Bikini Atomic Bomb tests and his initiation into the “Kingdom of Neptune,” which is a ritual every sailor undergoes upon first crossing the equator.

In Traveling with Neptune: Portrait of my Father, I’ve referenced two fathers; my own personal father who you see in the video tape; and Neptune, an archetypal father that we all carry within us. Neptune, is the symbol for Snug Harbor, as he is the father god of the waters of the world: oceans, rivers, seas.

Neptune astrologically rules the sign of the fish, Pisces. Neptune unifies and is the planet of dreams, sensitivity, the unconscious and the worlds of unreality. Neptune symbolizes universal love and beauty; symphonizing with the whole cosmos; having the capacity to transcend the finite self through experiencing unity with a greater whole. Neptune’s symbolism ties it to a longing for redemption – playing the dual roles of redeemer and victim. “Neptune’s greatest challenge is not whether redemption is possible but whether we are prepared to take responsibility for our individual part in it without punishing somebody else.” 1

Water is the primal substance, the source of all creation. Symbolically, the ocean represents the unconscious, which we reach daily through dreaming while asleep. A return to water is a return to a pre-existence, a new birth, and this has been used in virtually all ancient initiation rites. This piece also references themes of water and ecological issues that pertain to it.

The Atomic Bomb has perhaps been the most definitive event to shape the globe this century. The Operation Crossroads underwater bomb test released radioactivity into the surrounding environment, contaminating ships that Naval crews could never scrub clean. Today ecological damage continues as we continue to try to tame, shape and control whatever our desires seize upon, ultimately damaging ourselves in the process.

As the daughter of a witness to Bikini’s tests, Traveling with Neptune: Portrait of my Father allows us to reflect upon man’s past and present attempts to control destiny through “progress.”

1 The Astrological Neptune and the Quest for Redemption; Liz Greene 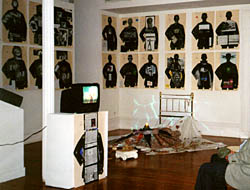 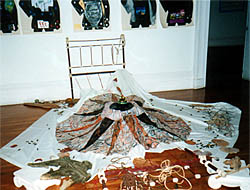 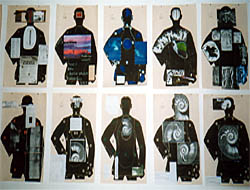 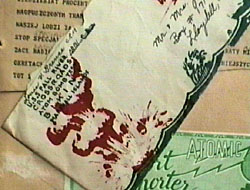 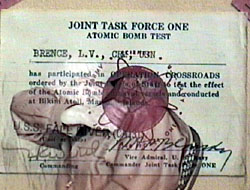 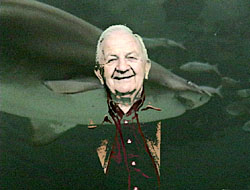 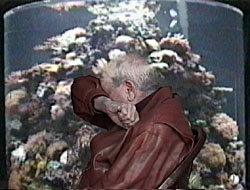 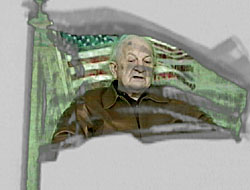