Lili White will paint and strategically place 8 gold leaf glyphs onto the Natural Elements living in the GARDEN of Le PETIT VERSAILLES. 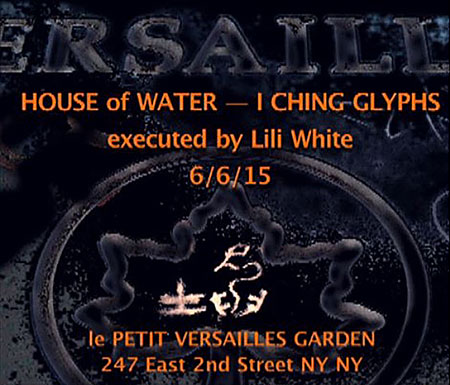 The glyphs are the earliest known pictographs of the I Ching’s HOUSE of WATER or “the abysmal.”

Lili Whiteʼs brief notes on the I CHINGʼs THE HOUSE OF WATER for a painted glyphs project at Le Petit Versailles Garden ©2015:
This explanation of the I CHING or THE BOOK OF CHANGES, an ancient augury from China, takes an approach appropriate for wandering through a garden. The glyphs, taken in order, allow one to walk through the space, ending up in its center. 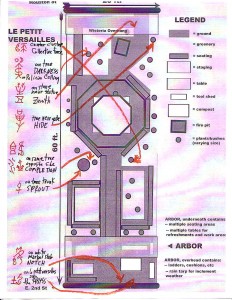 Basically, the I CHING contains everything. To arrive at an understand of its “judgements”, try thinking of the terms it uses as interior, archetypal energy forces within oneself. We often seek to settle our issues outside in the material world; involving other people. 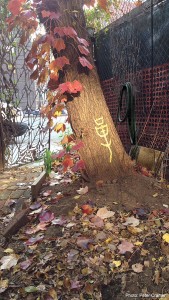 Each house of the I CHING moves through 8 hexagrams. Each hexagram is determined through six tosses, using either coins or sticks. Each toss indicates a straight line, or a broken line, or what is called a “changing line”. The hexagram is formed by stacking the lines from the bottom up. Each of the 6 lines that forms the hexagram, has its own meaning. Each I CHING hexagram is made up of 2 trigrams of 3 lines, that are named after elements of nature because they present a particular quality. For example: waterʼs quality is considered “dangerous”, thunder is “shocking”, and mountain is “keeping still”. The I CHING has 8 elements, and also has 8 HOUSES with 8 changes that transform the initial energy. The first hexagram in any house is a double of the same trigram. Similar, to the stacking of the lines, the HOUSE begins to change from the bottom up, forming 8 different hexagrams. When the bottom-line changes, to form a different hexagram, that is the second change in the HOUSE. In the 3rd change, the 2nd line has changed, and this is how it proceeds.

THE HOUSE OF WATER, is the double of a trigram of “water”: this is referred to as “water over water”. The element of water never loses its essential nature, it flows on and on and remains true to itself. It centers on the heart that can penetrate the meaning of all situations. 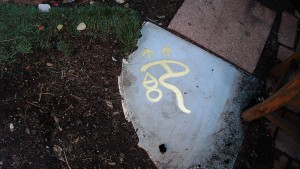 THE HOUSE OF WATER is also know as the house of the “abysmal” because its first pictogram is of an abyss, a pit, or a ravine. In the beginning, humans lived in pit house dwellings, and dwellings could also be used for storage, to contain captives, or were sometimes used in rituals.

Water over water is #29 in the book of the I CHING and its meaning is “ the principle of light is enclosed in the dark” —also known “reason”— so perhaps emotion are playing a heavy part here. The image of the abyss suggests water is flowing in a gorge, and that one is trapped in it. This is a dangerous situation, you are vulnerable but the danger needs to be faced. So, danger is considered a positive thing, because it teaches one to be adaptable and not aggressive. This only possible if there is a reserve of inner strength. Water/Water is about how to get out of your old habits of your heart and mind that ensnare you.

The second hexagram in THE HOUSE OF WATER is #60, water over lake. Its principal glyph/pictogram is named “notch”; which is a Chinese word for the joints between bamboo. An English translation of this talks about “limitation”. Limitations were created to preserve civilization. 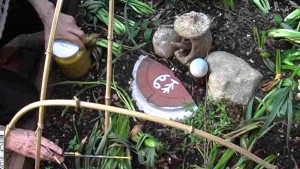 #60 is about developing limits. A “limitation” should be found between restraint and freedom; between corporate and social responsibility. Conduct should be balanced, one must set limits upon one’s actions, set limits on loyalty and discretion.

It is best to proceed in the middle way.

The I CHING’s way of giving advice uses the term “the superior man”. “The superior (hu)man” shows the best action to take. #60ʼs superior man “creates number and measures and examines the nature of virtue.” It also advises not to go too far: don’t harm yourself through the limitations you set for yourself.
It talks about acting like a warrior: “a warrior never loses touch with his inner nature; he never restricts himself to a single pattern or notch. Each notch has it’s own pattern and each notch connects to the one before it and after it; this is fortune”.
The third hexagram in THE HOUSE OF WATER has water (clouds)
over thunder. Thunder is something that arises and comes out of the ground in a great force. This is #3, and it’s meaning is “sprout” or “difficulty at the beginning”. Here we are immersed in a situation of tumultuous chaos. This is a time of growth and all beginnings are always very difficult. “The superior man brings order out of chaos.” It advises that nothing should be undertaken, that you should appoint helpers, but at the same time you must lend a hand and participate with inspiration and guidance during this time of crisis. 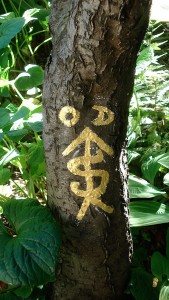 The fourth change in THE HOUSE OF WATER , #63, is “completion” or “after completion”. This hexagram is water over fire. Fire and water occur together here in equilibrium. This combination is also found in European alchemy, where an elixir is made and an inner child is born.

#63 has a very complex glyphic form. One of these images is crossing a stream in a boat. You want to reach the other side and the keyword here is “ caution”. Even though you think that the situation is finished, this is not the time to relax. The whole situation has reached it’s pinnacle, and therefore, there’s nowhere else to go except down. As indifference is the root of all evil, stay alert to ward off any disaster that might be coming around the bend.

The fifth change, #49 is named after the pictograph for the hide of an animal, and it means “hide” or “molting” or “change” or “revolution” This hexagram is lake over fire. “Lake” and “fire” are also known as two sisters in the same family — one is older and one is younger and they’re kind of always fussing and fighting. The I CHING is saying that the opposition between these two trigram/elements, forces a change, like in a revolution.

It states that, only one that has the confidence of the people can accomplish a revolution, and this can happen only when the time is right. “One must proceed in the right way so he gladdens the hearts of the people by enlightening them. This person must be free of selfish aims and really believe the needs of the people, so that there’s are no regrets”. Times change and with them, demands do as well— “the superior man sets the calendar in order and makes the seasons clear”. #49 is about sorting through whatever the situation is.

After “revolution” the next hexagram is # 55 and it’s the six change in the HOUSE of WATER. It is thunder over fire, aka lightning, so it’s like a thunderstorm washing away and making clear the way of what is to come. It is known as “abundance”, “zenith”, “canopy”, “citadel”— this is the fullness of the highest that you can reach. Expanded intelligence forms the conditions for zenith and this expansion is complemented by wisdom.
This says, “ the superior man decides lawsuits and carries out punishments. Here, laws are being enforced in a very specific way and only a born ruler can do this. The time to carry this out is limited and doesnʼt last. But it says, “be not sad, be like the sun at midday, illuminating everything.”

The transformation of THE HOUSE OF WATER is almost finished. In general, we can see how what we have moved through already (like “limitation”), consolidates into a path of transformation for the primary force in question.

The next to the last hexagram in THE HOUSE of WATER is # 36, known as “darkness” or “darkening of the light”. Its most archaic glyph reads as “pelican calling”. The pelican was one of the sacred birds in China and anthropologists think that perhaps this means that the Chinese saw a bird in the moon, and there was also mention made of an eclipse that occurred thousand of years ago in China. So maybe this “darkening of the light”, is like an eclipse where you couldn’t see the moonʼs bird. # 36 has undertones of separation, threat, danger and distress. Here earth is over fire, covering the “light”. The keyword is “censorship”. It advises caution and being reserved: you are in danger, and you must hide your inner light.

There’s a legend here about King Wen, who was put in prison by another king. During his imprisonment he wrote the “judgments” of the I Ching. Each hexagram has a “judgment” and an “image” and by contemplating these philosophically, different writers present similar interpretations in books on the I CHING .

The advice here is “to remain outwardly tractable in attitude. Do not drag the practices of others censoriously into the light: in social intercourse try not to be all-knowing, but let many things pass without being duped.”

King Wen died, and the last hexagram in THE HOUSE OF WATER is #7, called “collective force” or “the army”. The next legend tells about King Wenʼs son, who brought his fatherʼs body into war with his army. He avenged him, won the war and created the next dynasty.

Here earth is over water. Water could be said to be “emotion”: too much could be a dangerous because, it is out of control, without accomplishing anything purposeful. The general/ leader of an army, maintains obedience over a collective force who can kill. After the passion of war we must guard against the delirium of victory that follows as it can give rise to injustice. An army has the potential to degenerate into a behavior, with no purpose to it. Discipline is what holds it together, and discrimination set limits on behavior.

The Army needs “perseverance and a strong man that they respect.” This is something that should not be achieved by force. Rather, it requires that you have captured the hearts and minds of those inside the collective force. This is the conduct needed to wage “a victorious war”. By awakening enthusiasm you can move forward and accomplish something.

Another image for #7, is like discovering there is a resource of water inside the earth, and it can be used to make something prosper— like plants. An army is a power stored within the nation, just like water is stored within the earth. This hexagram presents the unification of heart and mind, just as a general is united with his king under one purpose, so the ventures shared together will be successful.

In conclusion, THE HOUSE OF WATER, started with chaos in the beginning, and developed into a discipline control of passion, armed with reason, that allows for an accomplishment of something that is just and right. — Lili White 6/2015